Was it a Cross or a Stake? 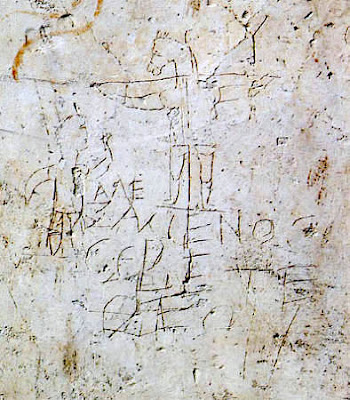 In my last post we got side-tracked from looking at the cross itself by an interesting quote from an ‘authority’ insisting Jesus died on a stake. The Insight book contains an entry on the issue of the Stake in which this single ‘authority’s’ words take up more than two-thirds of the entry. It turns out this is not the authority the Watchtower would have you believe. You can read it here.

The Stake or the Cross?

What is further interesting about the Insight entry is the following Watchtower statement:

‘In classical Greek the word (stau·ros#) rendered “torture stake” in the New World Translation primarily denotes an upright stake, or pole, and there is no evidence that the writers of the Christian Greek Scriptures used it to designate a stake with a crossbeam.’

Of course, if it ‘primarily’ denotes a stake then it might sometimes denote a cross. A word that has a primary meaning inevitably has a secondary meaning, otherwise it would have a singular meaning. To insist there is no evidence the gospel writers meant a cross when writing stauros is to assume too much and the historical evidence rather stands against the claim.

Stauros does indicate a stake or upright beam. If you erect fence posts you are using stauros, the verb stauroo meaning ‘I fence with pales.’ The stake as a means of punishment can be used in a variety of ways. It may be used for torture as well as execution. In the Old Testament criminals were stoned to death and sometimes their bodies hung on a tree as a warning (Deut.21:22-23) that body being considered accursed (Gal.3:13). This humiliation explains why Christ was described as being hung on a tree (Acts 5:30).

NB. Have you noticed the Watchtower has carefully avoided the language of those doing the crucifixion...Latin?

In the Jan/Feb 1985 issue of Biblical Archaeology Review Greek archaeologist Vasilius Tzaferis, wrote about the exciting find of the tomb of a 1st century man named Yehohanan son of Chaggol:

‘At the end of the first century B.C. the Romans adopted crucifixion as an official punishment...During this early period, a wooden beam, known as a furca or patibulum was placed on the slave’s neck and bound to his arms...When the procession arrived at the execution site, a vertical stake was fixed into the ground...the patibulum or crossbeam, to which the victim’s arms were already bound, was simply affixed to the vertical beam…If the victim was attached by nails, he was laid on the ground, with his shoulders on the crossbeam. His arms were held out and nailed to the tow ends of the crossbeam, which was then raised and fixed on top of the vertical beam.’

(Thanks to Randall Waters’ Refuting Jehovah’s Witnesses for this quote)

There was not only a crossbeam, the Romans had a name for it. A furca describes a fork-like structure, it is where we get our English fork.

Remember the words of Vasilius Tzaferis, ‘When the procession arrived at the execution site, a vertical stake was fixed into the ground.’ Isn’t this what is described in Matthew’s gospel?

The Greek, however, is still stauros, an upright stake. Remember that the Insight book states, ‘In classical Greek the word (stau·ros#) rendered “torture stake” in the New World Translation primarily denotes an upright stake, or pole.’

Consider the facts studiously ignored by the Watchtower Society:

The Romans did execute people on upright stakes, but they also executed people on crosses.

The crossbeam on the cross has a Latin name, furca or patibulum, and slaves were made to carry this patibulum to the place of execution.

While stauros denotes an upright stake in ancient times, by Roman times it also referred to a cross, or the crossbeam carried by the condemned man. Strong’s wisely distinguishes between definition (an upright stake) and usage (a cross) saying:

4716 staurós – the crosspiece of a Roman cross; the cross-beam (Latin, patibulum) placed at the top of the vertical member to form a capital "T." "This transverse beam was the one carried by the criminal" (Souter).

Christ was crucified on a literal Roman cross (staurós). Staurós ("cross") is also used figuratively for the cross (sacrifice) each believer bears to be a true follower-of-Christ (Mt 10:38, 16:24, etc.). The cross represents unspeakable pain, humiliation and suffering – and ironically is also the symbol of infinite love! At the cross, Jesus won our salvation – which is free but certainly not cheap! For more discussion on the untold suffering of Christ on the cross see stauróō ("to crucify on a cross").

[The "cross" (Mk 8:34) is not a symbol for suffering in general. Rather it refers to withstanding persecution (difficult times), by the Lord's power, as He directs the circumstances of life. As Christ's disciples, believers are to hold true – even when attacked by the ungodly.]

Given the clear and accurate descriptions of Roman execution in the 1st century, what is it Christ calls his followers to take up and bear in Mark 8:34? Further, as I hinted at the end of my last post, Thomas has something to help us. His doubts about the risen Christ were expressed in a very particular way: 'unless I see in his hands the marks of the nails [plural]'

Finally, the picture at the top of this post is the famous (but ignored by the WBTS) Alexamenos graffito (also known as the graffito blasfemo, or blasphemous graffito). It is estimated to date from c.200AD and depicts a young man worshipping an ass on a cross. The Greek inscription accompanying it roughly translates, "Alexamenos worships [his] god," and mocks Alexamos’ Christian faith. Even enemies of the cross know it is a cross on which Jesus was crucified.

Popular posts from this blog

Mormon Christians? Whats in a Name?

By Mike Tea August 01, 2008
The Mormon Church, disturbed by the continuing identifying of polygamus sects in the news with the name Mormon, recently issued a press statement aimed at "clarifying" issues. It is interesting to note that if you substitute the name "Christian" where they use the name "Mormon" it makes a very good argument for us against the claims of the Mormon Church. The full press release is reproduced below in italics with each paragraph rewritten in ordinary text to present it from a Christian perspective. SALT LAKE CITY 10 July 2008 On 26 June, Newsroom published a package of information featuring profiles of ordinary Latter-day Saints in Texas. With no other intention but to define themselves, these members provided a tangible depiction of what their faith is all about. They serve as the best distinction between the lifestyles and values of The Church of Jesus Christ of Latter-day Saints and a Texas-based polygamous group that has recently attracted media atte
71 comments
Read more

Jesus is not The Father - Dawn Llisone

By Michael July 09, 2020
I spend a significant amount of time speaking with Jehovah's Witnesses about the deity of Christ. It's one of their favourite topics, since they have memorised verses which seem to indicate that Jesus was created and somehow “less than” the Father. If you are willing to go down this theological rabbit hole with one of Jehovah's Witnesses, you are a brave soul indeed. Yet, such a discussion needn't scare us. Some Christians say that the only thing we can do is share our personal testimony with Jehovah's Witnesses, as any other discussion is fruitless. Whilst a testimony is powerful and I'd certainly encourage sharing it, the fact remains that at some point the teachings of Jehovah's Witnesses need to be addressed biblically. Therefore consider: every Jehovah's Witness has one main argument against Jesus deity. If you address their core misunderstanding, the rest may fall down like a house of cards. Let's explore this together and hopefully, h
2 comments
Read more

Watch Tower: The Most Important Thing to Jesus?

By Michael February 01, 2022
On their website the Watch Tower write: ‘As we read Jesus’ prayer in John chapter 17, we can see Jesus’ deep love not only for his apostles but also for us. (John 17:20) The most important thing to Jesus, though, is not our salvation. During the whole time he was on earth, the most important thing to him was to glorify his Father’s name. For example, when Jesus first explained why he had come to earth, he read from the scroll of Isaiah: “Jehovah’s spirit is upon me, because he anointed me to declare good news to the poor.” We can be sure that when Jesus read this, he pronounced God’s name clearly. —Luke 4:16-21. ‘Long before Jesus came to earth, Jewish religious leaders taught people not to use God’s name. Imagine how much Jesus must have hated that tradition. He said to those religious leaders: “I have come in the name of my Father, but you do not receive me; if someone else arrived in his own name, you would receive that one.” (John 5:43) Then, a few days before his death, Jesu
Post a Comment
Read more