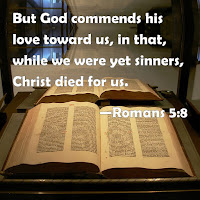 ‘Our doctrine is positive and life affirming...We refuse to believe, with some churches of Christendom, that the biblical account of the fall of man records the corruption of human nature or to accept the doctrine of original sin. We do not believe that man is incapable of doing the will of God, or is unable to merit the reward of Divine approval; that he is therefore totally estranged from God and that whatever salvation comes to him must come as a free and undeserved gift.’

In his work, The Parable of the Wicked Mammon, Tyndale brings a very specific charge against false prophets:

‘...[divers texts] many have enforced to draw the people from the true faith, and from putting their trust in the truth of God’s promises, and in the merits and deserving of his Christ, our Lord...and have taught them to put their trust in their own merits, and brought them in belief that they shall be justified in the sight of God by the goodness of their own works…’

Tyndale charges that such false prophets follow the wisdom of the world, typified by the philosophers of this world. He describes such worldly philosophers as ‘enemies to the gospel,’ citing Paul, who wrote:

The quote above, from the Mormon leader Hugh B Brown, typifies what Tyndale addresses himself to, what Paul is warning us about. Brown makes clear his conviction:

When a Christian, then, declares we are saved by grace alone, through faith alone, in Christ alone, Mormons and others sneer at our ticket-to-heaven, token, easy-believism. It is an offence to them, this presumption on God’s good nature.

This is the thinking behind such statements as, ‘Ours is not a one day a week religion, ours is a seven day a week faith.’ This is what is behind the Jehovah’s Witness belief that they alone ‘go into all the world,’ obeying Jesus’ injunction in Matthew 28. Christendom, after all, is full of people who simply go to church; Snug.

This, however, is the philosophy and boasting of the world. The world cherry-picks its ideas and philosophies to make itself look good, to make itself god, and it does look good to the undiscerning. Who can fail to be impressed by the self-made man? But the self-made man has an unfortunate habit of worshipping his maker, no matter he tragically falls short (Ro.3). The Bible makes clear this won’t do:

‘You were dead in your trespasses and sins in which you walked, following the course of this world…children of wrath!’

Doing things the world’s way brings only death but, for many, this language is too strong. What many Christians struggle with is the imperative pressed upon us to choose between the world and the Kingdom of God.

Fooled by the World or Saved by Grace?

No wonder since it presses in on us from all sides, It’s the way people think and speak, the atmosphere they breathe and they don’t even reflect on it. Tyndale’s concern, our concern, is that we should not be fooled by the works salvation message of a lost and perishing world, with its false pride, and godless self-regard.

Paul goes on to write, ‘But God, being rich in mercy, because of the great love with which he loved us, even when we were dead in our trespasses, made us alive together in Christ-by grace have you been saved…’

‘For in the faith which we have in Christ and in God’s promises find we mercy, life, favour and peace. In the law we find death, damnation, and wrath...The law when it commands that you shall not lust, gives you no power so to do, but damns you, because you cannot do so.’

It would serve well to consider those words in the context of Paul’s powerful message in Romans 7. Who, indeed, will deliver me from this body of death? Yet, works salvation, the philosophy of the world, insists this is scandalous. Believe me, we haven’t begun to see scandalous.

‘But God, being rich in mercy, because of the great love with which he loved us, even when we were dead in our trespasses, made us alive together in Christ-by grace have you been saved-and raised us up with him and seated us with him in the heavenly places in Christ Jesus, so that in the coming ages he might show the immeasurable riches of his grace in kindness towards us in Christ Jesus. For by grace you have been saved through faith. And this not your own doing; it is the gift of God, not as a result of works, so that no one may boast.’ (Eph.2:1-9)

Where Hugh B Brown, and the world, sees man as principled, capable, and filled with potential, the Bible sees man as dissolute and dead, a child of wrath. Here is the scandal, that God, seeing us in that state of corruption, made us alive in Christ. This is the most dangerous idea of the Reformation, the most dangerous idea of Christianity. ‘God showed his great love for us by sending Christ to die for us while we were still sinners.’ (Ro.5:8)

‘If you will therefore be at peace with God, and love him, you must turn to the promises of God, to the gospel, which is called by Paul...the ministrations of righteousness (2 Cor.3:9) and of the Spirit. For faith brings pardon and forgiveness freely purchased by Christ’s blood, and brings also the Spirit; the Spirit looses the bonds of the devil, and sets us at liberty. For, ‘Where the Spirit of the Lord is, there is liberty,’ says Paul...that is to say, there the heart is free and has power to love the will of God; and there the heart mourns that he cannot love enough. Now is the consent of the heart unto the law of God eternal life...’

Popular posts from this blog

Mormon Christians? Whats in a Name?

By Mike Tea August 01, 2008
The Mormon Church, disturbed by the continuing identifying of polygamus sects in the news with the name Mormon, recently issued a press statement aimed at "clarifying" issues. It is interesting to note that if you substitute the name "Christian" where they use the name "Mormon" it makes a very good argument for us against the claims of the Mormon Church. The full press release is reproduced below in italics with each paragraph rewritten in ordinary text to present it from a Christian perspective. SALT LAKE CITY 10 July 2008 On 26 June, Newsroom published a package of information featuring profiles of ordinary Latter-day Saints in Texas. With no other intention but to define themselves, these members provided a tangible depiction of what their faith is all about. They serve as the best distinction between the lifestyles and values of The Church of Jesus Christ of Latter-day Saints and a Texas-based polygamous group that has recently attracted media atte
71 comments
Read more

Jesus is not The Father - Dawn Llisone

By Michael July 09, 2020
I spend a significant amount of time speaking with Jehovah's Witnesses about the deity of Christ. It's one of their favourite topics, since they have memorised verses which seem to indicate that Jesus was created and somehow “less than” the Father. If you are willing to go down this theological rabbit hole with one of Jehovah's Witnesses, you are a brave soul indeed. Yet, such a discussion needn't scare us. Some Christians say that the only thing we can do is share our personal testimony with Jehovah's Witnesses, as any other discussion is fruitless. Whilst a testimony is powerful and I'd certainly encourage sharing it, the fact remains that at some point the teachings of Jehovah's Witnesses need to be addressed biblically. Therefore consider: every Jehovah's Witness has one main argument against Jesus deity. If you address their core misunderstanding, the rest may fall down like a house of cards. Let's explore this together and hopefully, h
2 comments
Read more

Watch Tower: The Most Important Thing to Jesus?

By Michael February 01, 2022
On their website the Watch Tower write: ‘As we read Jesus’ prayer in John chapter 17, we can see Jesus’ deep love not only for his apostles but also for us. (John 17:20) The most important thing to Jesus, though, is not our salvation. During the whole time he was on earth, the most important thing to him was to glorify his Father’s name. For example, when Jesus first explained why he had come to earth, he read from the scroll of Isaiah: “Jehovah’s spirit is upon me, because he anointed me to declare good news to the poor.” We can be sure that when Jesus read this, he pronounced God’s name clearly. —Luke 4:16-21. ‘Long before Jesus came to earth, Jewish religious leaders taught people not to use God’s name. Imagine how much Jesus must have hated that tradition. He said to those religious leaders: “I have come in the name of my Father, but you do not receive me; if someone else arrived in his own name, you would receive that one.” (John 5:43) Then, a few days before his death, Jesu
Post a Comment
Read more